5 Reasons Your Toilet Has Weak Flush

Sometimes your mighty porcelain throne flows less like Niagara Falls and more like a lazy river. That’s a fancy way of saying your toilet has a weak flush, which can be frustrating, embarrassing, and even messy. But don’t worry because in this article, we’re here to help you fix the problem.

If you have a toilet that doesn’t fully flush, common causes include a clog in the trap, a worn-out flapper, blocked rim jets, a faulty float, or an issue with the handle and chain.

Check these areas if your toilet isn’t flushing properly

Call a Durham, NC, plumber to fix your toilet

A toilet with a weak flush is typically a minor plumbing issue. However, if you can’t get your toilet to flush like normal after following the above tips, then it’s time to bring the professionals.

At Acme Plumbing Co., we’ve never met a faulty toilet that we couldn’t fix (or replace). To schedule an appointment with one of our licensed plumbers, send us a message or call us at (919) 688-1348. 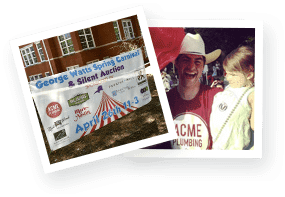